The wind is caused by the sun, the differences in heating between the poles and the equator, differences in air pressure, the rotation of the earth and the curvature of the earth. Together these factors create all types of winds, including low level surface winds to higher atmospheric jet stream winds. Earth’s winds can range from a few knots (1.15 mph or 1.85 kph) to over 200 knots, all of which carry energy.

“The total amount of economically extractable power available from the wind is considerably more than present human power use from all sources.[8] An estimated 72 terawatt (TW) of wind power on the Earth potentially can be commercially viable,[9] compared to about 15 TW average global power consumption from all sources in 2005.” 1

Because there is so much energy to be extracted from the wind, wind energy is currently one of the largest and most profitable renewable energy industries in the world.

At the basic level, generating electricity from the wind is pretty straight forward, i.e., the wind spins a propeller that is attached to an electric generator or turbine that generates electricity. However, the actual science involved is quite complex (see Energy and Cost Calculations – Wind Turbines article this web site). There are many variations to wind turbine design.

On a small scale wind generators are used on boats, campers, mobile homes, remote home locations, etc. These range in power output from around 40 watts to 10 kilowatts (10,000 watts), but can also go as high as 1 megawatt (1 million watts) (see wind turbines available at http://www.allsmallwindturbines.com/). Small wind generators are guided into the wind by a wind vane, have a direct drive generator and produce DC electricity. 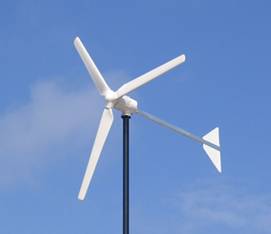 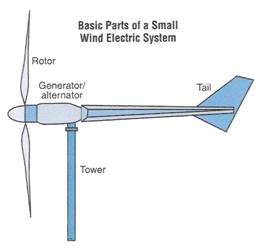 On an industrial scale, where wind turbines are used by a utility company or on wind farms, they can range from 1 to 7.5 megawatts, and 10 megawatt wind turbines are under development. Large wind turbines are guided into the wind by computer controlled motors, use a gear box that allows for variable generator speed and usually produce AC electricity. 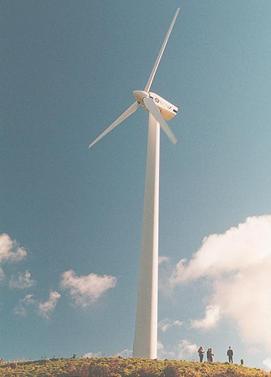 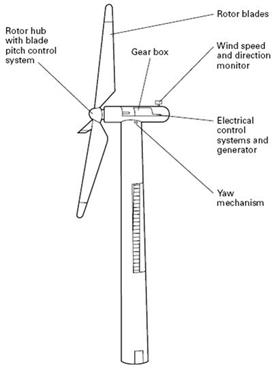 Wind turbines and generators come in two main design types, these being: 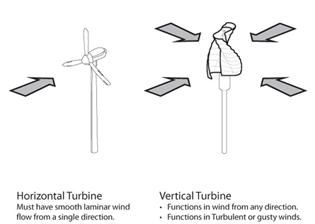 HAWTs are the most common type of wind turbine due to the generally greater efficiency, ease of maintenance and versatility of design, although at industrial sizes the transportation of parts and the installation procedures can pose difficulties.

VAWTs are less common due to lower efficiencies, height limitations and greater complexity of construction at large sizes. Their main advantages include the ability to access wind from all directions and therefore no need to be guided into the wind, the ability to access wind closer to the ground, lower wind startup speeds and lower noise signatures, all of which are making them an increasingly interesting option for urbanized areas. 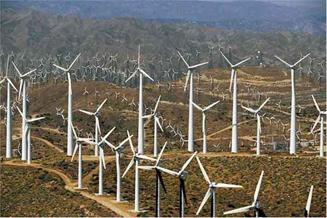 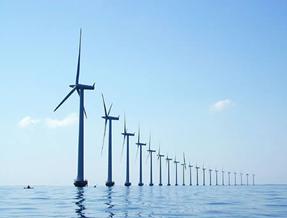 A fundamental aspect in initiating a wind farm is planning for the location. The factors involved include:

These factors are studied and tested until satisfactory results allow for construction.

When sending power to the grid most wind farms, like power stations, need a transformer to step up the voltage.

Wind farms are an extremely effective way of producing electricity because they do so without creating any pollutants. Beyond this, the cost of their production and installation is usually recovered within a few months of operation, making them very sound investments. 2