An electric charge exists whenever atoms gain or lose electrons. This is so because protons and electrons are attracted to each other, and in each of these states electrons want to move about trying to find and join atoms with extra protons. This electron movement or potential movement is what creates an electric charge.

There are two states for the condition of an electric charge.

The first is called static electricity whereby extra electrons build up on the surface of a material and there is no net flow of electrons into or away from the surface. When this negative type of charge comes close to a surface with a neutral or positive charge there is a quick discharge (neutralization) of the charge as the electrons jump to the other surface. See articles below.

The second type of charge is called an electrical current (current electricity) where the extra electrons are moving unidirectionally from the negative charge to the positive charge. This happens when free electrons are attracted to an area where there are more protons than electrons and there is a channel for them to move there.

DC current is what takes place when using batteries where electrons flow from a negative charge to a positive charge. 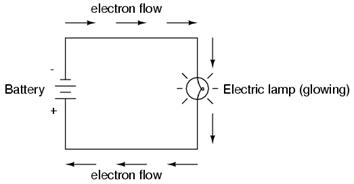 Alternating Current electricity involves a system that alternates the direction of electron flow back and forth by alternating the polarity. This is achieved by using a device called an armature, as part of an alternator, that creates reversing magnetic fields so that electrons will flow toward the positive field as it switches from one side of the system to the other.

Volts, Amps, Watts and Ohms are the units used to define the condition of an electrical current. The most common way to communicate this is to use the analogy of water flowing through a hose, where flowing water is like flowing electrons. The water pressure is like volts, the rate of flow (current) is like amps, the resistance (size of hose) is like ohms, and the overall power, i.e., pressure x rate of flow, which in electricity is the volts x amps, is watts.

There is debate about how to define electricity. See the following article: