A battery is an electro-chemical device designed to harvest electrons.

A battery works by taking advantage of the processes of oxidation and reduction, which together are termed ‘redox’.

Creating a redox process requires that two substances come in physical contact with each other, and that one of them is an electrolyte. A classic example of this is a metal and a liquid, e.g., iron and salt water where oxidation takes place. In this example salt water is the electrolyte because it contains positively charged sodium ions (cations) and negatively charged chloride ions (anions). Oxidation takes place as the salt water strips electrons from the iron atoms. 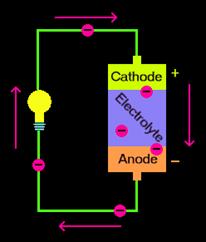 Today there are many systems to accomplish the redox processes for batteries, but to illustrate the general principal a description of the galvanic cell is provided below.

A classic example of a secondary cell is the common 12 volt lead-acid battery used in cars.

The lead-acid battery works where the anode is made with lead (Pb) and the cathode is made with lead oxide (PbO2) and both are in an electrolyte of sulfuric acid (H2SO4). The chemistry is such that as the battery releases electricity both electrodes become lead sulfate (PbSO4) and the sulfuric acid becomes water. The advantage of this system is that the process is completely reversible and when an electric charge is fed into the battery the sulfate returns to the water and the electrodes return to their different lead states. 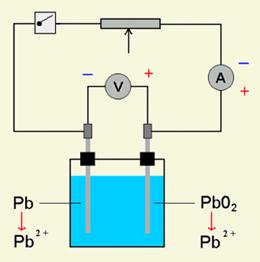 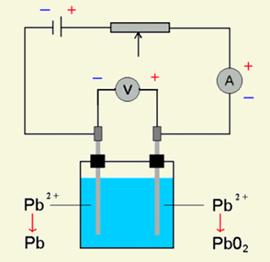