A batch collector system is the simplest form of solar collector. It consists of a water storage tank in an insulated box, covered by a glass plate. The storage tank is painted black or with a coating that effectively transfers heat from sunlight. The inside can include a reflective surface to increase heat absorption. The insulation and glass cover trap heat from sunlight inside the box to create an oven-like environment. Batch collectors are only effective in sun and warm temperatures. 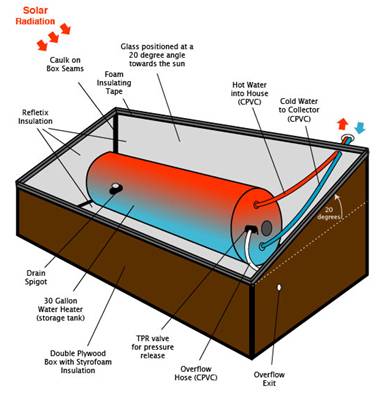 Flat plate collectors are the most common and basic type of solar heat collector. They are composed of a box that contains a layer of insulation on the sides and at the bottom. On top of the insulation is a dark colored absorber plate that has tubes attached to it. Lastly, the box has a glass or plastic cover.

When the sun hits a flat plate collector it heats the absorber plate, which heats the tubes that contain a liquid, usually water. The glass or plastic cover, in combination with the insulation, trap the heat. Depending on the system, the heated water is then moved from the tubes by water pressure, gravity or a pump.

The heating capabilities of a flat plate collector vary considerably with the availability of sun and the outside air temperature, i.e., they are less effective in clouds and cold temperatures than in sun and warm temperatures.

Evacuated tube collectors take advantage of the condition where convection and conduction (heat transfer) cannot take place in a vacuum. This type of collector is composed of a series of evacuated glass tubes that each contain an internal pipe for liquid. The internal pipe is covered with a heat transferring coating. Sunlight passes through the evacuated glass and heats the internal pipe and the liquid. Because of the vacuum, the heating potential for this system stays relatively constant in a variety of sun and air temperature conditions, including being effective in winter.

There are two basic configurations for evacuated tube collectors:

Advantages of the passive system are its simplicity of function, ease of maintenance, lower  cost, and lower likelihood of overheating. Disadvantages include lower efficiency. 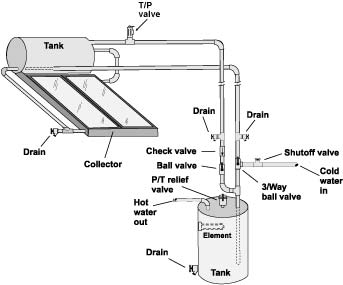 An active system uses an electric pump to move liquids about. It can be of any configuration including flat plate or evacuated tube and direct or indirect. The pump can be powered by a solar panel or the mains electricity supply. The addition of a pump allows for greater overall control of the system including:

Advantages include greater efficiency, use in a greater range of climates and better overall control. Disadvantages include more complex installation and maintenance, increased costs and reliance on electricity.

By adding an intelligent controller to an active system the functionality can be fine tuned to include (from Wikipedia article):

Systems where overheating is a possibility usually have mechanisms to control this. Overheating controllers can include: