The atom is composed of a nucleus at its center, which contains positively charged protons and neutrally charged neutrons. Moving about the nucleus are electrons, which are negatively charged and are bound to the nucleus by the electromagnetic force.

Electrons are often represented as orbiting the nucleus, but in reality their movement is more complex and they are considered to move about in an “electron cloud”, which exists around the nucleus. Within the electron cloud there are different shells (energized levels) that an electron can occupy. A stable atom has an equal number of protons, neutrons and electrons. As such it has a neutral charge.

There has been debate about charge assignment, see the following article about conventional flow notation versus electron flow notation: 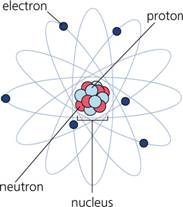 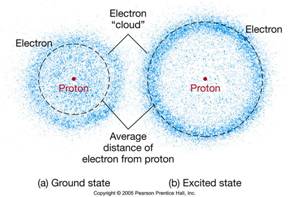 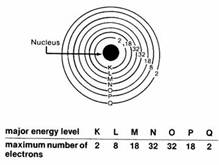 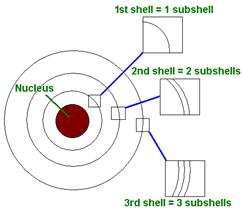 Electron configuration in most atoms involves electron pairs, i.e., two electrons occupying the same shell level, as opposed to just one electron, a state which also exists. In an electron pair each electron has an opposite spin to the other, which causes them to cancel out each other’s magnetic influence and creates magnetic neutrality for the atom. 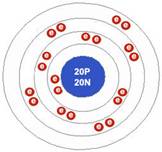 Electrons in the outermost valency shell are the furthest from the nucleus and therefore have the weakest attraction to it. In certain conditions the outermost valency electron is so loosely bonded to the atom, e.g., the copper atom,  that it is free to randomly wander from one atom to another. This creates free electrons. When the random movement of free electrons is controlled by an external influence, e.g., a magnet, the free electrons can be directed to form an electrical current. 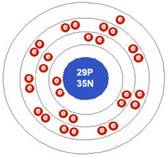 The electron is responsible for chemical bonding where electrons are shared between atoms to create molecules. There are two types of bonding, covalent and ionized.

Covalent bonding involves atoms sharing valency electrons, usually in atoms which have only one electron in their valency shell, and so seek stability by adopting a second electron, in this case by sharing it with another atom that also seeks this stability. 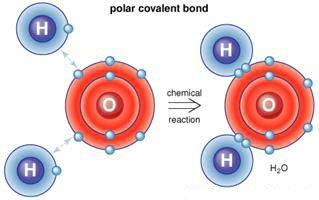 Ionic bonding involves one atom losing an electron to another atom. The first becomes a positively charged ion and the second becomes a negatively charged ion. This charge difference creates an attraction between the two ions and they join to form a bond.

“An electron has a natural orbit that it occupies, but if you energize an atom you can move its electrons to higher orbitals [shells]. A photon of light is produced whenever an electron in a higher-than-normal orbit falls back to its normal orbit. During the fall from high-energy to normal-energy, the electron emits a photon — a packet of energy — with very specific characteristics. The photon has a frequency, or color, that exactly matches the distance the electron falls.” 1

The reverse process, i.e., when an electron moves to a higher orbital (shell), happens when a photon impacts with an atom, i.e., the atom absorbs external energy. 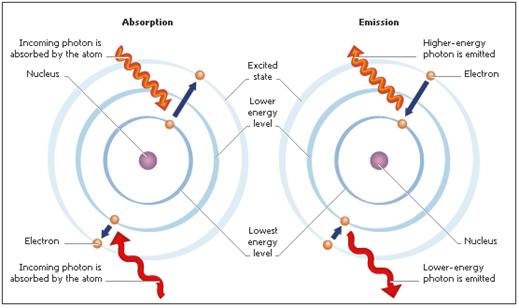 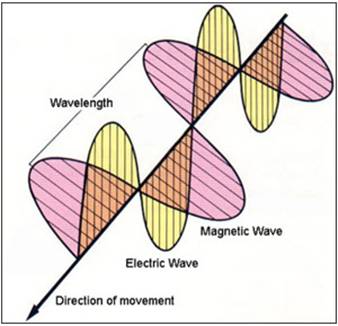 When photons hit matter, several things can happen depending on the amount of photon energy and the type of matter hit. See video below.